DO YOU HAVE A CHALLENGE TO SOLVE? READ ABOUT OUR PROJECTS TO SEE HOW WE CAN HELP YOU

WE HAVE 75+ YEARS OF PROJECT EXPERIENCE

Read our case studies to see our solutions at work.

Pike Electric offers turnkey solutions covering the engineering, procurement and construction for distribution line upgrades for clients across the U.S. From installing new lines to upgrading or undergrounding existing systems, Pike Electric has decades of experience providing construction, maintenance and restoration services for distribution systems. Our experience and safety record in working with energized lines and equipment are unparalleled.

Our team has successfully upgraded and installed new power distribution equipment and lines for high-rise buildings as part of a public authority’s network equipment replacement program. The program’s goal is to ensure that high-rise buildings in urban centers do not experience power outages that might affect critical services. After a thorough audit, more than 50 locations across the service area were identified to be in need of security and reliability improvements. Our team was contracted for 18 of these upgrade projects. 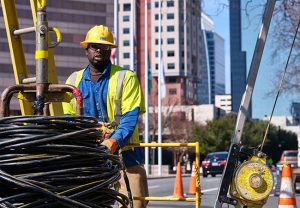 We partnered with a large public utility on an ambitious wood pole replacement project. Our team contributed to all phases of the project, from early planning activities through pole installation.

As we do with every project, our team began with a comprehensive safety and risk review. We brought together our estimating and operations teams to evaluate every aspect of the job for opportunities to maximize scheduling, fleet and crew efficiencies. Our teams planned the logistics, operations and exact service schedule well in advance. Multiple crews were deployed simultaneously across the service areas. Crews fielded poles to determine all pre-construction needs, entering each pole into the established schedule and assigning specific crews. Many poles were replaced while the lines remained energized to limit outages. Including this project, our crews have installed well over 1,500 distribution poles as part of this initiative. 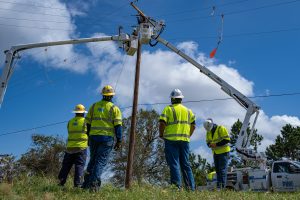 We partnered with a large public utility on a statewide feeder hardening project. The client sought to improve customer reliability and mitigate risks from storms by replacing distribution feeders with larger, more wind-resistant poles and wires. Our team contributed to all phases of the project, from early planning and engineering through the removal of existing structures and installation of new feeders.

The project began with a comprehensive safety and risk review. Once a feeder was scheduled for upgrade, the hardened feeder was designed to meet the utility’s wind-resistance criteria and sent to the utility for approval. We then brought together our engineering and construction teams along with utility representatives to evaluate every aspect of the job for opportunities to maximize scheduling, fleet and crew efficiencies.

Our crews have completely replaced over 1,500 feeders through this initiative. A majority of feeders have been replaced while the lines remained energized to limit outages and work was often completed at night to limit the effect on local businesses.

Commencing in February 2020, we began a complete line rebuild in a Texas metroplex. The project objective was to upgrade substations to a 138 kV double-circuit transmission line using a 2569 A conductor. Additionally, the terminal equipment was upgraded to a minimum rating of 3200 A.

Due to the location of existing structures, Pike installed new structures on existing foundations. The work required the demolition of the existing poles, the demolition of concrete caps to expose anchor bolts, cleaning them and then installing the new structure. This was all completed on the feeder road of a tollway. Traffic control was set up and removed daily to accommodate tollway guidelines.

This switch station, located in a muddy floodplain, offered unique challenges for installing a new 345 kV circuit over an 11-mile course from the switch.

Given the site’s terrain, this was a unique project with multiple access constraints, including several rivers, major highways and road crossings. To overcome the access constraints, Pike even utilized a helicopter to hoist a truck over a river to install a tower on a stub angle foundation.

Pike recently finished an 11.5-mile, 138 kV line rebuild. The construction was on sandy terrain, which can bring challenges to any construction project. The terrain also had restricted access points, forcing the team to maneuver along a 50-foot-wide right-of-way in an energized corridor.

The project also included the installation of 129 new double-circuit steel pole structures along with three twin-bundle conductor phases. The new line was constructed while the existing 138 kV circuit was energized. To accomplish this, new steel poles were set between the center and leftmost phases of the existing circuit. This strategy required additional effort to modify the existing H-frames to obtain the clearance needed to set new double-circuit steel monopole structures.

The scope of work included:

Pike Electric builds and upgrades substations using the latest cutting-edge equipment and construction techniques. Our work is laying the foundation for utility digitization.

A multi-state investor-owned utility turned to Pike to upgrade its substations and protective relays — a major undertaking that Pike completed in two short years. We replaced existing electro-mechanical relays with microprocessor-controlled units, upgraded all distribution substations to be SCADA-capable and installed technologies that enabled remote monitoring and control from a central distribution control center. Through this project, the utility transformed the way it operated and made major strides on its path towards digitization.

This urban center is a magnet for data centers and other businesses that require large amounts of electricity. To address this growing city’s need for electricity, we partnered with the local public authority to construct an important new substation — one of the dozens of urban substations we have built for the client. We brought together a multidisciplinary team to preplan the project and identify challenges and lessons learned from previous substations building projects for the client. This rigorous front-end planning successfully drove the project through installation, testing and commissioning of the new substation.

In all, our team handled all aspects of this substation construction for the client, including:

Since 2015, we have teamed with a regional utility to provide security upgrades on 10 substations. 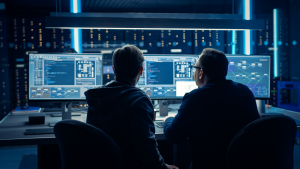 We have a track record of completing the most challenging renewable projects while exceeding customer expectations.

Pike led the construction of a 22 megawatt solar plant that spanned over 100 acres with three arrays. A total of 60,000 solar panels were installed across the three arrays. The work included site planning, engineering and construction.

Work began in fall 2019 and there were numerous challenges to overcome, including severe weather, rough terrain, heavily forested portions to clear and delays in solar panel delivery. From autumn 2019 through spring 2020, a mix of snow, pounding rain and heavy winds made portions of the site almost inaccessible. Despite those challenges, the Pike team’s steady management and can-do attitude led to its successful completion.

Pike Electric provided engineering, procurement, construction and testing services for a leading provider of photovoltaic (PV) solar energy solutions, helping it bring four large solar projects online across the U.S. As part of this project we also installed a 34.5 kV collection system and a fiber optic communications backbone from the PV switchgear to the station at each solar site.

We have the experience to help your customers and renewable generation facilities with their energystorage needs.

Pike was commissioned for design, engineering, installation and commissioning of a Battery Energy Storage System (BESS) to support a 200,000-square-foot pharmaceutical plant. This particular facility is owned by a large biotech firm that is currently working on a vaccine for the Corona virus. We’re proud to help bring more renewable energy online while supporting the battle against Covid-19.

Pike was the general contractor for this project and was also responsible for the engineering and design. This project included prepping the site for the equipment, designing the footings, battery and inverter installation, testing, permitting and assistance with other on-site duties. 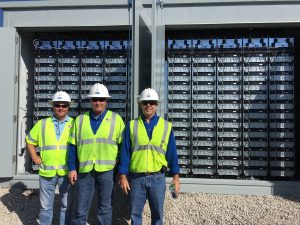 We handle everything from implementing back-end information systems through storm response. Our crews are always at the ready to assist in restoring power and communications systems quickly and safely when disaster strikes essential services.

Early on August 27, Laura made landfall on the Louisiana coast and was the tenth-strongest U.S. hurricane by wind speed on record. The storm caused billions in damages to southwestern Louisiana and southeastern Texas near the Gulf of Mexico. After landfall, Laura moved inland and continued to cause additional damage across Mississippi and Arkansas the next day.

Pike Electric deployed crews for overhead distribution, underground distribution and transmission restoration work. We essentially rebuilt the electrical infrastructure of Lake Charles, Louisiana, which was the epicenter of damage. At the restoration’s height, we had the largest number of linemen on the job — a workforce about three times larger than the next largest contractor.

Hurricane Isaias was a destructive Category 1 hurricane that caused extensive damage across the Caribbean and along the East Coast of the U.S. It generated a large number of tornados, including the strongest tropical cyclone-spawned tornado since Hurricane Rita in 2005. The damage was concentrated in the Northeast, where trees and power lines were downed across a wide area with more than 3 million power outages reported. Outages were concentrated in New Jersey and metro New York City.

Pike remained on the move throughout the Isaias response. The storm was originally predicted to make landfall on the northeast coast of Florida, before shifting to instead make landfall in the Carolinas. The storm then swept north, causing widespread outages in the densely populated Northeast, including metro New York City. Pike employees continued to deploy and redeploy further north as the storm progressed. The majority of our response efforts took place in New Jersey, Delaware, New York and Connecticut. Some crews traveled from as far away as Texas to respond.

At Pike Electric we are proud of our unmatched expertise and commitment to storm restoration. When two record hurricanes hit Puerto Rico in September 2017, 80 percent of the island’s transmission lines were knocked out, and almost all the island’s residents were without power. Pike Electric crews were on the job seven days a week to support the recovery effort in Puerto Rico and overcame numerous obstacles to provide early damage assessments. Our crews restored over 1,150 poles and 170 miles of transmission and distribution lines in coordination with the Puerto Rico Electric Power Authority and the Army Corps of Engineers. 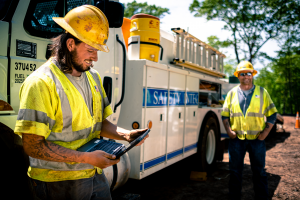 Upgrading a Historic Military Base

Pike has a long history of supporting our country’s military bases. We are collaborating with a large regional utility as the sole-source contractor supporting 50-year privatization efforts at one of the largest military bases in the world, which serves as a prominent deployment center for the U.S. Army. The aging infrastructure at the base was a major concern to top military leaders, and Pike was asked to provide 24/7/365 coverage to address maintenance, upgrades and emergencies. Our scope of work has expanded from basic electric distribution to streetlight upgrades, substation expansion, gas services and fiber installation. We are also playing a key role in the next phase of base security by working on microgrids, resiliency against attacks and self-sufficiency. 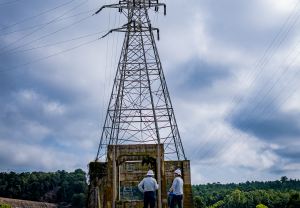